Nancy Baker is originally from San Francisco, California.  She is a theatre director and lives in Los Angeles.  She doesn’t own a TV or a microwave.  It’s not so much that she’s an earth avenger, technology just escapes her.
I caught up with Nancy on Skype.
Nancy Baker
Friday, May 13 2011
Los Angeles 3pm
Bristol 11pm 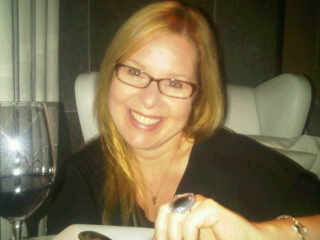 What are you working on at the moment?
I was approached by a medical organization to have actors put on scenarios. They’ve asked me to put that together and its… all a bit experimental in the corporate world.  Theatrically, I’m looking at places out of a LA, to do this play, sending out proposals and such.  It’s a play I’ve done before so just working on finding space and money.  We’re always looking for money.
What’s the play?
It’s called Dear Mrs Baker, and oddly enough, its about my mom.  About the guys in Vietnam who wrote her letters, there were more than 50 of them.  The play takes their writing and creates this dual world, of this San Francisco house with Vietnam surroundings.
Why were the soldiers writing to your mom?
She is an interesting women.   She’s pretty conservative.  She didn’t like all the protesters and thought that was very disloyal.  She met my dad at a USO dance, so what does that tell you?!   There was a man in 1965 that wrote an Op -Ed piece to the local paper saying,
Soldier: While you guys are protesting, we are dying for the right to protest.
My mom was so embarrassed by the protesters that she wrote him a letter saying,
Mom:  Not all of us feel this way. I don’t really have much to offer you.  Here are some cookies.
He shared the cookies.   Those guys sent thank you notes and then it snowballed from there.  She wrote to these guys for five years.  And when they came home, they’d go through San Francisco and my dad would collect them from their base and my mom would throw a big welcome home party.  The Vietnam Memorial Wall’s 30th anniversary is in two years.  Were trying to get the play up in other places, so that it will easily go to DC.
What would you say is your directing style?
Hmmm…laughing. Outcome specialist.  I was an actor for 30 years and I definitely have an acting/Meisner approach.  I like it to be a very collective process, in a way, but I also believe in steering a ship and have it reach an ultimate, visual conclusion. I don’t tend to be too autocratic but the vision is the vision.   Stubbornly chill.
What is it like being a theatre director in Los Angeles, the land of film and tv?
Lonely.  Its interesting because you’ll be at a theatre event and someone asks what you’ve done, you tell them, and they turn around and say,
Someone: Well darling, you haven’t really don’t anything have you?!
Nancy:  Hmm.  I thought the Kennedy Center was pretty impressive!
It’s a funky dynamic of doing theatre in a non- theatre town.  What’s particurlarly frustrating for me is, theatre actors have tread boards, versus on camera where its all very minor, small and intimate.  The camera does so much for you.   That doesn’t play to the 50th row of a theatre where you have to be big, without losing that intimacy.  A lot of actors in LA aren’t theatre trained and have more difficulty with that.
Who or what inspires you?
What, would be fear.  I’m really inspired by people working and struggling and the moment right before they make it.  It makes me want to keep doing it.  It makes me curious to the work being the most important thing. The people who are really still hungry.   I'm inspired by people’s hunger and motivated by fear.  There you go!
What type of theatre are you drawn to?
Original theatre, the classics, fluff, social commentaries. Any art that makes someone think and feel is successful.  As a director, if I’m reading a play and half way through it hasn’t made me care, I move on.
What are the challenging aspects of making theatre during our current economic times?
Theatre is expensive.  The devil is in the details.  Space is expensive, electricity is expensive, printing.  It makes theatre owners less willing to risk and makes theatre companies have to struggle so much more to get stuff made.  There are funds but you have a lot of people competing for those. A lot of film actors try and throw together a show because they want to be seen, an agent wont show up, but they want to say they’ve been in something, because at least they’re working.  That has value.  That's WHY they look for those funds. You have to get creative about how you are going to fund something.
Dream projects?
It would be at the Gate Theatre in Dublin with Anthony Hopkins, Marcia Gay Harden and Daniel Day Lewis.
Final question.  Is the director dead?
Every symphony needs a conductor.   Every ship needs someone steering it.  Theatre is ultimately a lovely, visual piece and in order to do that I think you have to step outside and have someone minding the vision.   Actors, if they’re doing their job properly are to close to see, so for me, it’s not possible to do a successful piece without a director.
Thanks Nancy for sharing your thoughts!
"I will say nothing to an actor that cannot be translated into action." Elia Kazan
"The essence of the stage is concentration and penetration. Of the screen action, movement, sweep."  Elia Kazan
Posted by Nancy Medina at 05:19 0 comments

Sam Ellis, is originally from Vancouver, Canada and lives in Bristol, England.  He is a film and theatre director who has had a few different lives, traveling the globe from Vancouver Island, to Germany, and Scotland.  He is an alum of the Royal Scottish Academy of Music and Drama and the Bristol Old Vic Theatre School.
Sam Ellis
Saturday, May 7th 2011
Clifton, Bristol 1:30pm 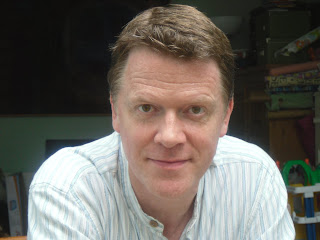 What are you working on at the moment?
I am working with the Bristol Acting Academy, and directing their showcase.  It’s a bit teaching and directing. I’m really enjoying enthusing people, seeing new talent, and encouraging that talent. Because I have a family, having a steady income is more of what I’ve been focusing on.
How did you get into directing?
I was a policeman for three years, before going to drama school.  I started doing corporate role-plays as a police officer and working with a corporate company, when the director of that company left.  I said I’d fill in until they found a proper director.  I was still there after four years making films for the Crown Prosecution Service and Lord Chancellor's Department, dealing with crews and big budgets.  I became a director by default.  I found it very fulfilling, to get actors together and tell a story.
What do you look for in an actor?
Courage.   Courage, to be open and honest. To give it a go and not worry too much if they succeed or fail.   Integrity.  I certainly wouldn’t be looking for ego.  An actor’s ego gets in the way of  the work.  Generosity is very important when working in a team.  The ability, to tell a beautiful lie, truthfully.
How does your work as a director and actor inform you as a teacher of acting students?
I encourage and help them feel safe, so that they’re in a safe place to explore.  I’m not necessarily out for results. I’m after a sense of ownership from the actor, because ultimately, from there, comes a sense of truth.  I feel that theatre really is an actor’s medium, I think you’re there to help the actor find the truth in the scene. That truth is what's important to an audience rather than any obvious director's input. Good theatre direction should almost go unnoticed.
Who or what inspires you?
Frank Capra.  It’s a Wonderful Life, for it's story telling.  I love anything by the Cohen Brothers, Tim Burton.  People that have a quirky take on things.  Martin McDonagh's The Pillowman.  [Steven]  Spielberg, who I’ve been lucky to work with on Saving Private Ryan.  I was inspired being on the film set, and as the actor thinking ‘oh I’ve got three hours before I shoot this thing’  and then looking at the director whose thinking ‘I’ve got three hours to solve this thing’  It’s a lot of troubleshooting, problem solving, as opposed to the actor who is trying to conserve his energy for the scene.  So watching that, and watching him work very closely with his crew, was hugely inspiring. There was no ego.  He was completely open to the expertise of his team.  That made me realise, that what you do as a director, is you facilitate a creative team.   To bring out the best in each of those members of the team, that’s what the job is!
Dream Projects?
I was an actor for 20 years and have been a director for 9.   My aspiration really, is to continue making money doing what I love.  As a kid, I had this fantasy novel, that if I had the money, I’d like to make it into a film.   I always hope when I read a script or screenplay that it will excite and inspire me.  So I hope I keep getting inspired.
Final question.  Is the director dead?
Theatre is an actor’s medium and it should be an actor’s medium. A good actor has the ability to almost self-direct, an innate ability to understand what’s needed and get up and do it.  But if you have a group of actors, trying to direct by committee, then that’s doomed really.  You need someone to facilitate the process and to buffer the actor from the theatre management.  Free the actor to be creative.  Film is very much a director’s and editor’s medium.  A director is very well alive and kicking in film.  I’ve seen performances created in the editing room.  The shots, what you are getting the audience to look at, that’s all from the director’s point of view.  Without a director, film wouldn’t happen. I think the director is most definitely not dead, they are needed in both fields but for different reasons.
Thanks Sam for sharing your thoughts!
“Conscious preparation leads to unconscious inspiration”.  Stanislavsky.
Posted by Nancy Medina at 07:25 1 comments

This week I had the pleasure of meeting up with the graduating students of the Bristol Old Vic Theatre School Directing Course.  It is an excellent program, that offers four special and talented individuals the opportunity to develop and hone their craft.  Their final projects, called Directors’ Cuts opens this Tuesday 3rd May and runs to 28th of May at the Alma Tavern in Clifton, Bristol.
For more info on their shows and how to get tickets please visit;
http://www.almataverntheatre.co.uk/theatreWhatsOn.php
The Fantastic Four

http://www.wefund.co.uk/project/bovts-directors-cuts
“Rehearsals are divided in two stages; the first stage is one of experiment when the cast helps the director. The second stage is creating the performance when the director helps the cast.”  Stanislavski
“Humans are capable of seeing themselves in the act of seeing, of thinking their emotions, of being moved by their thoughts. They can see themselves here and imagine themselves there; they can see themselves today and imagine themselves tomorrow.”
Augusto Boal
“But only if I believe that my directing talents will improve the material I'd be working on. I want to make sure I don't sacrifice beautiful material on the altar of my direction.”
Andre Braugher
Posted by Nancy Medina at 11:54 0 comments

I am director and producer and currently Artistic Director of Corner Theatre, Bristol, UK. I am also founding member of the Regroup Theatre, NYC.